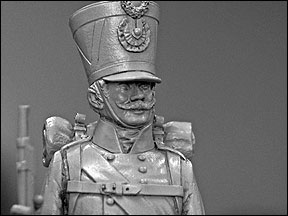 Infantry 1808-15, Grenadiers and Fusiliers: (A) Feldwebel, Garde Regt. zu Fuss. These senior NCOs wore officer's shako plumes, swords and Troddeln. The cane, which was a sign of rank, is shown suspended from the Kollet button. The Busch was made up of white over black feathers. (B) Grenadier, parade dress. On the shako is the black Busch. (C) Fusilier, Garde Regt. zu Fuss, parade dress. On the shako is the black Busch and the Guard Star. A 'Faschinenmesser' is worn on a shoulder belt. (D) Fusilier, parade dress. The shako is shown here bearing the distinctive Prussian cockade worn by the Line Fusiliers.
(Sketches By: John Stallaert, according to David Nash & Almark)

On campaign the shako was covered with an oil skin.

Messages In This Thread