“The flash of Napoleon Bonaparte’s sword so blinded men in his lifetime, and indeed, long after, that they were unable to distinguish a second weapon in his hand.  The clearer vision which time and study bring have shown that he used words almost as effectively as the sword, and that throughout his career the address ably supported the military manœuvre….

“The spell he exercised over the army is explained here, partially, at least.  It was the custom to post the addresses throughout the ranks were each soldier could see and read them.  The men had been accustomed at home to seeing all official communications from the Government to the people placed on the bill-boards, and so read them from habit.  But Napoleon’s bulletins, if they were posted in a familiar way, had a new character.  He addressed the soldiers as if they were comrades, explaining the general situation of the army to them, exhorting them to new efforts and promising them rich rewards. 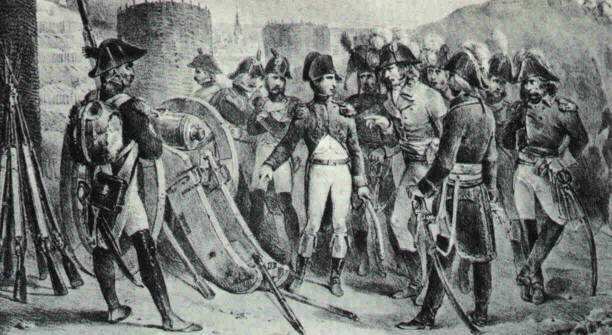 “After a battle he stated the results to them, thus giving them a tacit recognition of their importance.  The explanation was one that all understood; it was clear and explicit, and bristled with figures.  Your common man grasps numbers.  They are the bullets of speech and sink in like lead.  When Napoleon rattled a volley of numbers at them—’Soldiers, in fifteen days you have won six victories, taken twenty-one stand of colors, fifty-five pieces of cannon, and several fortresses, and conquered the richest part of Piedmont. You have made fifteen hundred prisoners, and killed or wounded ten thousand men’ –they understood, and glowed with pride.

“The phrases with which he praised, condemned, exhorted them, were short, terse, and unforgettable. ‘You will return to your homes, and your countrymen will say as they point you out, “He belonged to the Army of Italy.”‘ Not a man with a spark of pride but remembered those words and dreamed that he walked the village street and heard the whisper following him, ‘He belonged to the Army of Italy.’ ‘Soldiers, from the summit of these pyramids forty centuries look down upon you,’ he cried in Egypt.  The splendid phrase voice the awe of the army in the shadow of the mysterious monuments, and they charged their dark-faced foes as if in the presence of all the heroes of the past.

“The perfect clearness and directness of the addresses is their most striking literary quality.  The classic pose affected by writers in Napoleon’s day he entirely ignored.  He wished those whom he addressed to understand his meaning.  If he spoke to the soldier it was to convince him that certain facts were true and to persuade him to adopt certain theories.  To do this he put what he wished believed and repeated in so clear a fashion that it could not be mistaken.  If both bombast and bathos sometimes characterized his addresses to the army, it was never at the expense of meaning….

“To the end of his career his addresses show the same vigor and range.  Even those sent to the inhabitants and authorities of Elbe are as fertile in schemes for improving the island as those addressed to the French people; they show, too, the same attention to detail….

“A study of these addresses shows that he never lost his exuberance of imagination.  However tragic his losses, he rebounded at once…It is because the addresses of Napoleon are so characteristic of the man, because they reveal so clearly his ambitions, his methods, his genius and his faults, that this selection from them is offered to the public.  It is a sketch of Napoleon by himself; an incomplete sketch, to be sure, but one in which every bold, sharp line is by his own hand.”