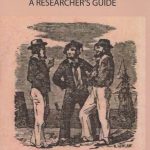 The title belies the actual theme of this book which is a guide to researching American merchant seamen who were caught up in the conflicts of the late 18th and early 19th centuries, when such men were often captured by both the British and French. It is privately published but available on Amazon.
Read More