By Roberto A. Scattolin, Italy

The hamlet of Marengo[1]has been without doubt one of the most cruelly contested European battlefields of all the historical times.

The battle, a major engagement of the French Revolutionary Wars (wars of the Second Coalition), started developing in the early morning hours of 14 June 1800 and saw the almighty confrontation on the field of honour between the French forces under the sound leadership of Bonaparte, so far acting in the role of prominent figure also on the political scene at Paris,[2] and the Austrian war machine handled with a renewed profusion of zeal by the talented Marshal Melas.[3] Having crossed the Alps at the Great Saint Bernard Pass in May 1800, the French army (totalling nearly 28,000 men) rapidly descended to the plains of Northern Italy. 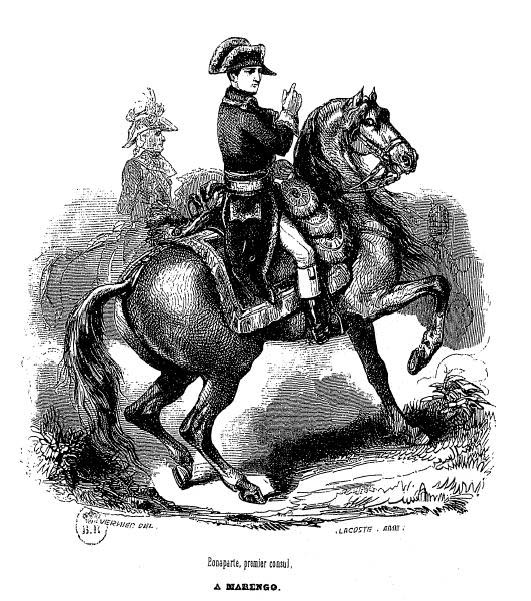 After the heavily disputed success reported on the Habsburgs troops at Montebello,[4] near Casteggio, the French completed their deployment on the surrounding countries of Fraschetta and around a wretched village named Marengo, a wild environment located some miles from the town of Alessandria.[5]

The 14th day of June, the violence and the stubborn determination of the offensive of the Imperial regiments of Melas[6] overthrew, after long-enduring phases of attrition and hand-to-hand savage combats, the shaken troops of Bonaparte. However, after an inevitable withdrawal had been executed for some miles eastwards  defeat seemed certain; but the strategic situation rapidly changed for the French host, and the battle was reversed.   The counter-attack of the French tactical reserve, lead by Général de Division Desaixde Veygoux[7] was launched, from the neighbouring area of the village of Saint Giuliano Vecchio,

His ultimate intervention brought fresh resources to the front-line and changed the tide of battle for the French.

A lively cannonade threw back the Austrian right wing, and a cavalry charge leaded by the intrepid François Etienne Kellermann[8] had awful results on the ranks of the Imperial Feld Bataillone.

Losses were severe to the belligerents: the French troops lost some 5800 men; the Austrians, 9400.

The battle ended in a French victory; negotiations led to the Austrians evacuating the plains of Northern Italy up to the line of the Ticino River.  Military operations in Italy were suspended. However, the Danubian monarchy remained at war with France; but on December 3, 1800, the Habsburgs eagles were defeated by General Jean Victor Moreauarmy at the battle of Hohenlinden.

Order of Battle of the Austrian Army at Marengo, 14 June 1800

The Austrian army counted the 30837 men ready for the combat, including 7543 cavlary.

[1] Due to its peculiar geographical features, and being established at the important confluence of the rivers Tanaro and Bormida, Marengo became very famous over the past centuries. Its plain witnessed the passing of Hannibal multi-ethnic fighting hordes, the presence of the Longobards (especially their Catholic queen Teodolinda) and the coming of the ancient Franks of King Charlemagne (742-814 A.D.). To celebrate his famous victory, Napoleon gave orders to coin a special golden piece: the Marengo, whose basic monetary value equalled 20 French francs. Marengo was also the name given to a famous horse in the service of Bonaparte. Purchased after the battle of Waterloo by General J. J. Angerstein, the mount died in 1829. His skeleton is preserved at the National Army Museum, London.

[2] Bonaparte was First Consul (after the Brumaire Coup).

[3] The vehemence of the disputed clash on the battlefield of Marengo had truly been outstanding; the engagement fought against the troops of the Austrian monarchy rapidly passed in the annals of military history acquiring world wide reputation for the savagery of the combatants. However bright and effectual it had been its strategical outcome, due words of honour should be applied to recall the prominent commander of the Austrian Imperial forces in Northern Italy. The figure of Melas has certainly been overshadowed by the tenacious counter-attacking of the French troops in the late afternoon hours of  June 14, 1800. The struggle that followed, with its terrific bloodshed  displayed determination of the antagonizing armies. Michael Friedrich Benoit, Baron von Melas (1729-1806), was a distinguished Field-Marshal of the Habsburgs monarchy.  Born in Radeln, Transylvania  in 1746, he entered the ranks of the Austrian army. During the European conflict of the Seven Years War (1756-1763) he took part in many heavy engagements, and rapidly ascended the stairs of the military hierarchy of the Habsburgs Monarchy. In 1799, he was placed at the head of the Imperial Army in Italy. His opening moves against the French were brilliant and rapidly crowned by the laurels of martial glory: he reported some outstanding victories at Cassano and Novi, and, early in 1800, succeeded in blocking Général André Massena in the Ligurian coast at Genova. In that strategic impasse, the French forces were compelled to capitulation. Melas was getting ready to invade France, through the territories of Provence, when news reached his General-Staff that a French army under Bonaparte had appeared in the Po Valley. After the defeat at Marengo (14 June 1800), he retired from active service in 1803, and died three years later.

[4] The village is located in Lombardy, in the province of Pavia. In this position Lieutenant-General Lannes, defeated the troops of General Ott on 9 June 1800.

[5] In Piedmont; this charming town was originally founded in the XIIth Century with the name of Civitas Nova, and can trace its modern name in honour of Pope Alexander III (Rolando Bandinelli of Siena, 1159-1181).

[7] Louis-Charles-Antoine des Aix, chevalier de Veygoux, called Desaix, was born in the castle of Ayat near Riom (Puy-de-Dôme) on 17 August 1768. He fell almost immediately, hit by a bullet in the heart, when the French forces started attacking the Imperial regiments near Saint Giuliano. On 24 June 1800, the Consuls established that the name of Desaix was to be inscribed on the colonne nationale and that a medal would be coined in his honour. Three days late, they also decided that his body was to be transported and buried at the monastery of the Great Saint Bernard.The name of General Desaix is inscribed on the Southern face of the Arc de Triomphe de l Etoile.