Eylau: An Abstract of the Chronological Exploits of the Grand Army

The Napoleon Series has a long tradition of publishing primary source material. Greg Gorsuch recently acquired a volume of official correspondence on the Eylau Campaign. It was printed in 1807 and it appears to be a compendium of correspondence between the Napoleon and various countries, most notably Great Britain. The correspondence is followed by Napoleon’s bulletins.  Our intention is to provide both the original material in French and a translation into English.

The exact title of the book is:

“An Abstract of the Chronological Exploits of the Grand Army, told in conjunction with principal events that took place during the glorious and memorable campaign of 1806 to 1807, from the departure of His Imperial Majesty Napoleon just until the battle of Eylau.” 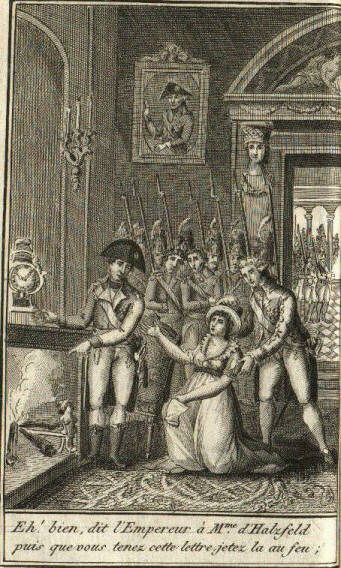 Preface of the Editor

An old soldier, passing the last years of his life reading all the public sheets, says to me one day:  “Im sad to (confusedly suffer) see so much glorious accounts isolated from each other, scattered in periodic sheets.  Shouldn’t one rather make a precise, exact and organized WORK of this memorable campaign?  It would be the first book to offer to martial imaginations for my young comrades;  by going through it they would be pleased to have been born under a reign of which the first days erase already the glory of the most beautiful centuries of antiquity…..You, for example, Sir, which often make leave your presses of good works…..”  I made true his wishes, and the following day I had to him the first volume of this honorable collection-My love for the Great NAPOLEON, the so natural desire of a Frenchman to transmit to posterity the successes which illustrate his fatherland, and to bring closer the materials which will be used one day as text with the history of the beautiful century that we traverse, such are the reasons which committed me to undertake this useful work.  Undoubtedly it would belong to the heros which carried out them to describe so many wonders, and Caesar alone was worthy to give his Comments to the posterity;  but modest in my enterprise, paying homage to the bold writers and the wise which will raise the colossus of the history, I wanted to give only one simple account, and I especially dedicated it to the Young Pupils of the Military academy of Fontainebleau because they would not know to study too much the Masters of whom they are prepared to follow the immortal example.

Foot-note.  I believed initially that I would publish this Work in a volume, but the extent of the matters forces me to make two of them.  I believe I have answered this demands on me, by publishing the 1st volume, which contains all the Particulars of this Campaign, since the departure of S.M. the Emperor and King, to the combat of Eylau, and the time of the re-entry of the troops in winter quarters.  The second volume, under press, will be finished only at the end of the campaign, and will be increased by an Analytical Table of the principal facts.  The people who will subscribe to two volumes will enjoy being given one for1 Fr.  50 C per specimen.  The subscriptions will be done at Mr. HÉNEE, Imprimeur-Libraire, street Saint-André-des-Arcs, no.5, old house of fire Mr. Knapen.

Placed on the Napoleon Series: 2003