Lessons on 1807: Maneuvers of Eylau and Friedland

Lessons on 1807: Maneuvers of Eylau and Friedland

Translator’s Note: This small volume was writtensometime after the Franco-Prussian War and the Sino-Russian War but before World War I.  It is written in a fashion that I suspect it to be something like a doctoral thesis at a war college.  It deals mostly with the cavalry and Pierre Grenier was probably a cavalry officer.  It is broadly broken down into “the Oder to Eylau” and the “Eylau to Friedland”.

FROM THE ODER TO EYLAU

We begin the study of the Polish Campaign with November 1st 1806, dividing it into four parts: the first will extend up to contact with the enemy (14 November); the second until the Grand Army went into their cantonments (29 December); the third until the disestablishment of winter quarters (27 January 1807) and the fourth until the Battle of Eylau (8 February 1807.)

The second mass waited on the first to finish its work; it was composed of the 5th Corps, established at Stettin, the 3rd Corps at Frankfort on the Oder, the Bavarian Corps marching on Crossen, the 7th Corps, the Guard and the remainder of the Cavalry Reserve encamped at Berlin.  As soon as the first mass became available, Napoleon intended to go with all his army to the meet the Russians, as he had done the previous year after Ulm.

Küstrin capitulated the 1st of November.  The French army therefore had in its possession all the bridges of the Oder between Stettin and Crossen.

Napoleon was unaware of where to find the Russian army and where the new Prussian army was reassembling.  To inform him on this subject, the army corps established over the Oder employed their cavalry in an exploration with an aggressiveness that is in stark contrast with the timidness of the cavalry of the IIIrd Prussian army made proof of in 1870.[1]  We would see the French cavalry carried 150 kilometers in advance of the advanced guard of the army corps, while the Prussian always rested at a short distance from their infantry and was employed only as a protective cavalry screen.

As soon as he arrived in Frankfort, the Marshal Davout sent the 2nd Chasseurs to Landsberg and the 1st over to Posen (150 kilometers from Frankfort).  Napoleon recommended to him “do not disperse your cavalry,” undoubtedly thinking of the combat at Schleiz where Murat only had at hand two regiments out of six.[2]

Then Davout was told by the Chief-of-Staff: “General Durosnel (cavalry commander of the 7th Corps), who is at Oderberg, has orders to cross the Oder and to push to the left: in case the need becomes pressing, he can order this cavalry to join him.”

The same day (3 November), in a letter of the Emperor to Lannes, whose army corps occupied Stettin: “My intention is that you reunite all your light cavalry beyond the Oder and that it scours all the country up to the Vistula (consequently greater than two hundred kilometers from the 5th Corps).  Give orders for your bodies of cavalry to join with those of Davout.”  Therefore, all the countryside was reconnoitered by the cavalry of 5th, 7th, 3rd Corps and the Bavarians up to the Vistula, up to Posen, up to Glogau.

The 4th of November, the 1st Horse Chasseurs entered Posen, the 2nd chasseurs were at Schwerin and the 12th at Friedeberg.

When Napoleon gave the order to push the cavalry so far away, in order to be able to prevent the approach of the Russians as long as possible before their arrival on the Oder, he recommended that his army corps not to proceed as long as he was unable to deploy that part of his army launched in the pursuit of Blücher.

In a letter of 5 November to Davout, the Emperor told him: “I will have you understand that my intention is that your infantry will under no pretext, pass Meseritz.”  As for the Russian army, Napoleon “doesn’t think it can be at Warsaw before the 20th of November.”

The 6th, the 7th Corps, encamped at Berlin, began its movement towards Küstrin to come to place itself with the 3rd and the 5th Corps.  The Württemberg Division received, the 5th, the order, “to move to Züllichau and to make contact with patrols on the left with Marshal Davout.”

The 6th, Davout wrote to the Chief-of-Staff: “I have directed the advance guard on Meseritz.  Tomorrow, it will reach there.  The army corps will be within three miles.”

As one is far from the enemy, the advance guard is at most 12 kilometers away.

Lannes had his advance guard division at Stargard.  “Treillard, commander of his cavalry, was to be within 20 miles of Stettin.”  He pushed strong parties onto Colberg, Posen, Graudenz.

The cavalry of Davout occupied the following placements: the 1st Horse Chasseurs was at Posen, the 12th from Friedberg to Driesen and the 2nd was extended from Pinne to Posen.

The morning of 7 November, Napoleon learned as of the 30th of October that the Russians were not yet in Warsaw.  He gave therefore the order to Davout to be at Posen the 9th; to Augereau, to be the same day at Driesen; to Lannes, to be at Schneidemühl on the same date.  There is 150 kilometers from Stettin to Schneidemühl, as much as between Frankfort and Posen; 300 kilometers from Warsaw to Posen.  Assuming that the Russians had occupied Warsaw the 1st of November, they could not attack the three army corps before the last had not reached the positions indicated. 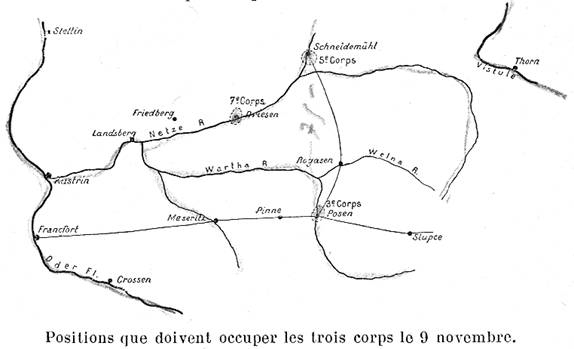 In the case of where Davout would be attacked, Napoleon recommended to him, “choose at Posen a good military position.”  If he was forced to retreat, to not retire on Frankfort, “he will reconnoiter a second position for retreat which has to be where a small brook meets the route to Posen to Schneidemühl, at the village of Rogasen.”  The three army corps will thus be reunited behind the Wartha, with their line of operations upon Stettin.  They will indirectly cover Berlin.  It was also the indirect coverage that was employed by Napoleon in 1811 for preventing the Russians from invading Poland.  The 24th of March of that year, he gave the order to Davout to carry a part of his forces to Danzig to this end.

In May 1813, Eugene indirectly covered the concentration of the Army of Meyn, by making his line of communications on the lower Rhine.

The 7th of November, Napoleon wrote a new letter to Davout to tell him that he had received new accounts of the Russians: they were approximately 50,000.  The Emperor calculated that “the five first columns of 50,000 men cannot arrive at Thorn by the 7th or the 8th of November and the others 18th or 20th of November;” then he adds: “I cannot suppose the enemy could venture to attack the Posen position before the 18th.  I will amass there, before this time, the corps of Marshals Lannes and Augereau with yours, the allies commanded by Prince Jerome, the Guard, the divisions of Klein and Nansouty.”  He deployed then 80,000 men against 50,000 Russians; added to these, he hoped to have at Posen, the 20th of November, the corps of Murat, Bernadotte and Soult.

Napoleon envisioned what to do in the case where the enemy had superior forces before the arrival of these last corps.  He wrote Davout, “chose a good position near Posen, and draw up a plan such that I can withdraw on Stettin or Küstrin at will, that is to say by the right or left bank of the Wartha.  Make a good reconnaissance of all the bridges of this river.”

If the Emperor retired by the right bank of the Wartha, he would make a line of operations on Stettin; by then, the corps launched in pursuit of Blücher would become available.  If the enemy faced north, the forces which would be on the Wartha will fulfill the role of “masses of cover” and the corps sent against Blücher will emerge by Küstrin and Frankfort on its left side, thus acting like “masses of maneuver”.

If the enemy continued to march on Küstrin and Frankfort, the first forces will emerge from the bridges of the Wartha becoming thus the “mass of maneuver,” while the others corps will maintain itself at the head, acting like cover masses.

November 7, Blücher capitulated near Lübeck.  Magdeburg was taken.  Napoleon would now have at this disposal all the forces of the Grand Army.

Conforming to the orders given, Davout entered Posen on the 12th and immediately pushed his cavalry as far forward as possible to make contact with the enemy.

The 13th, Napoleon gave an order to his three corps approaching Thorn.  He wrote to Davout: “Lannes will be at Thorn the 15th, advance on Gnesen.  Augereau has orders to return to Bromberg.  You have authority to direct on Kowal the division (of cavalry) Beaumont; it will be able to send some parties to Plock and General Milhaud will be able to attempt an approach to Warsaw.

“I have ordered the division Becker to take Thorn.  There is only one important factor in all this: it is that my three corps reunite in a short time, if the movements of the Russians make it necessary.”

Above all, Napoleon wanted to have all his forces concentrated: in the case where the enemy would take the offensive by Thorn against Lannes, Augereau and Davout would support him and the three corps would make their line of communications through Posen.

The 15th, Davout announced to Napoleon he had reached Kowal and was within range of Thorn and Warsaw; he conformed with the spirit of Napoleon’s orders, Gnesen and Kowal are the same distance to Thorn.

The two dragoon divisions of Beaumont and Klein and the cuirassier division of Nansouty were placed temporarily under the command of Davout to be used by him for reconnaissance.

Milhaud received the order to move on Warsaw.

The 14th, contact with the enemy was made; a party of 30 French hussars belonging to the 5th Corps and who entered Bromberg the day before had been attacked by two squadrons of Prussians there.

The 16th, Colonel Gauthrin, of the 5th Corps, found the enemy at Tuchel, pushed up to Schwetz on the Vistula and sent on to Graudenz a party which returned with news that this city was occupied by Prussian troops.

Captain Perrin, of the 3rd Corps, met, the 16th, 60 enemy dragoons at Wroclaweck.

Davout sent on to Warsaw a party of 50 horses with Captain Tavernier.

These made contact with the enemy the 18th at Bolimow.

It found there 200 Cossacks and returned an account to General Milhaud that Sochaczew was occupied by approximately 5,000 to 6,000 infantrymen and two regiments of Prussian cavalry. 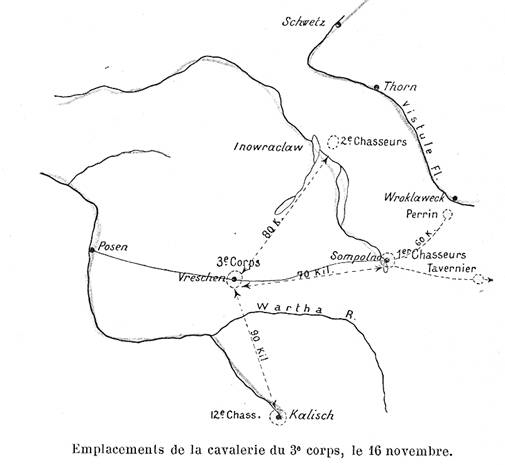 The 19th, a party of the 12th chasseurs seized Czenstochau at 120 kilometers from Kalisch.

The 18th, the 3rd Corps, and the cavalry occupied the places indicated by the sketch; two divisions of cavalry were in front of the army corps devoted to the exploration.

Lannes turned in an account on arriving before Thorn, that he had found that town occupied by 2,000 men and that there were in the surroundings 6,000 men. 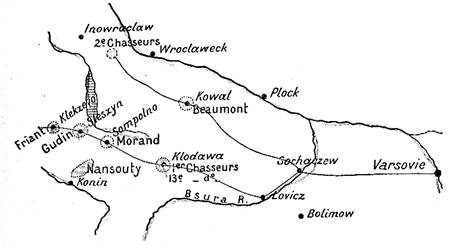 It was always clear on the left with Treillard who was already at Fordon.

[1] See Course in Cavalry Tactics of the School of War.

[2] See The Maneuvers of Jena, by M. the General Bonnal (course the School of War).

[3] See The Maneuvers of Landshut, by M. the General Bonnal (course of the School of War).