Deployment after the Rally of the first troops engaged

Coming from Alessandria
Generalmajor Fürst Johann von Liechtenstein[1]
(in the staff as cavalry commander) Fought without an official rank, as a volunteer

The Polish avant-garde suddenly counterattacked, by superior forces, was obliged to retreat. All those had passed the Tidone soon were in a melée, and were also forced again to pass back the creek. To give time to Rusca’s Division, on which the enemy fell en masse, to pass the Trebbia, General Charpentier made a movement on the left, with his brigade, thus covered their retreat and not allowing the enemy to pass the river.  They were helped by the rearguard of Rusca’s Division. The Polish division followed the movement of Charpentier, pivoting on its left, observing the enemy, which sought  to hit the flanks; but some battalion fire and manoeuvres made it give up its effort.

Consequently, the French divisions withdrew one after the other; the Polish division formed the rear-guard. The Austro-Russians pursued very carefully, considering the great darkness of the night. In this combat perished many Poles, and Major Iasinski, who had led them, was made prisoner of war. Victor’s, Rusca’s, and Dąbrowski’s Divisions, were forced beyond the Tidone, withdrew to the right bank of the  river Trebbia, leaving on the battlefield a 1,000 dead and 1,200 prisoners. The night having fallen, the army was ordered to take a defensive position behind the Trebbia, occupying its right bank. After having passed Trebbia in the night, the army took position close to Gossolengo, on the left wing. However Brun, with his detachment of French troops and the 1st Polish Battalion, under the command of Konopka, returned to the division near, Campremoldo-di-Sopra, and covered the left wing of the army.

In the official reports, sent by Suvorov to the Emperors, Pavel I and Franz II, he estimated the French losses at 600 men dead od wounded and 400 prisoners (mainly Poles). The Coalition Army’s losses were referred only to the days during which the combats between the Tidone and the Trebbia. We can only suppose the Austrian losses would have been notably higher than the Russian casualties. The Wouwermann Grenadier Battalion lost the 50 % of its force and was retired from the following orders of battle. 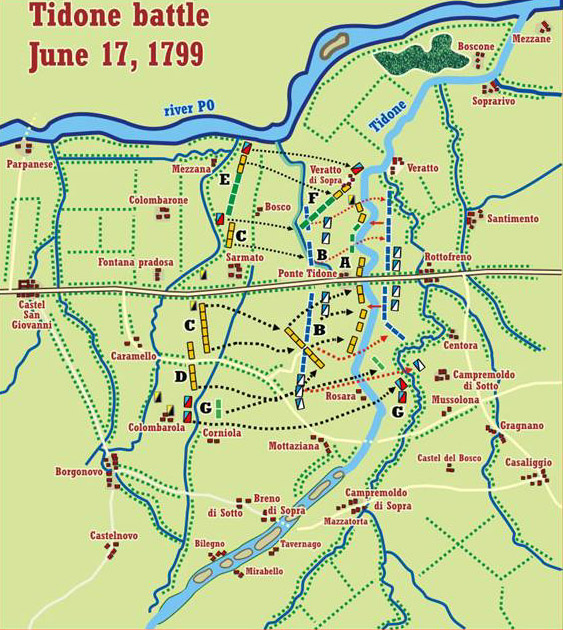 A: The Outposts and first line of Fieldmarshal Lieut. Ott on Tidone river (June, 17 1799).

B: A French attack forced the river, compelling Ott to withdraw until points B

C: and then till the village of Sarmato (17 June, morning)

D: The Austrian Avantgarde reached Ott’s Division in order to reinforce the line (17 June, morning, 11 AM)

F: Joint attack of the Coalition troops. French soldiers totally surprised and pushed back beyond Tidone and Trebbia rivers (17 June, after 2 PM)