The 1799 Campaign in Italy: Clearing the Lombardy Fortesses

(Three battalion in Venice. They will be sent later to Mantua) Cdr: Oberst Freiherr Ferdinand Beulwitz

As a fortress Mantua was one of the most formidable in Europe, a force of thirty to forty thousand men finding accommodation within its walls; but it had two serious defects: the marshy climate told heavily on the health of the garrison, and effective sorties were almost impossible. After Magnano General Kray was placed in charged of the besieging operations. Initially he detached, with a small force, General Elsnitz in order to organize the necessary siege camp around the city, later, and before the beginning of the Adda combats, he reached that camp leading the siege until its end, in Summer 1799. From that moment, the Austrian Mantua’s besieging army became the real Rearguard of the Italienische Armée, a kind of very large reserve unit for the campaign.

From a strategic standpoint of view, we can say that Mantua, in 1799, had not the same  impact as in the 1796 campaign. In Suvorov’s campaign, the Coalition armies had always a numerical supremacy over the French, similar  to Austria during the last 1796 months. However the Mantua blockade was not so crucial in 1799 as it had been three years before (when the blockades of the two fortress of Mantua and Kehl, in Germany, decided all the operational development). Probably the French had more motivated soldiers, for almost certainly they did not encounter the Italian  people’s resentment, and above all, they Bonaparte as commander, and  Massena and Augereau as  “executives”. 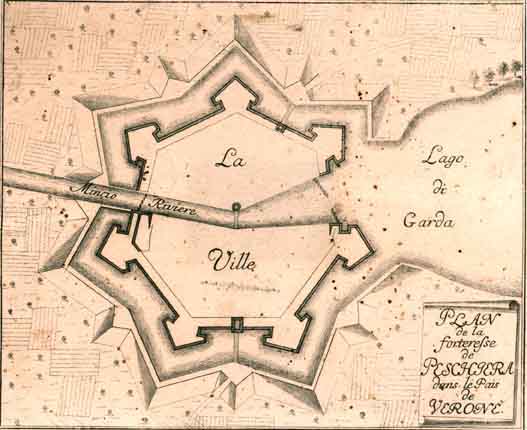 The Fortress at Peschiera

Medieval Lord Mastino della Scala beganthe town fortification works: the castle (Rocca) was constructed over a Roman building and  in athe 15th Century, the fortress was finally composed by a group of civil houses, surrounded by walls with towers disposed on five sides.   In 1439 Peschiera was part of the Serenissima Republic of Venice.  The town in 1549 had a new fortress which assumed a pentagonal shape. The town-walls were substituted with bastions, made with stones and earth, placed on the pentagonal base. This system of town-wall fortifications knitted the two ancient islands with singular and powerful fortified bridges, connecting together the two fortresses crossed by the main branch of the Mincio river.

This fortress configuration remained unchanged until the French arrival in 1796, after the fall of the Venice Republic. Initially the fortress was kept as originally, a border watch building. From 1800 and during the French domination (1801-1814) it was partially dismantled in order to build a set of fortications:  a system of separate forts, which surrounded the town, on dominant positions, within the countryside. Peschiera surrendered on May 7, 1799.

On May 6, 1799, Peschiera surrendered. The Austrians captured a flag of the 21e Demi-Brigade, which was there with one battalion 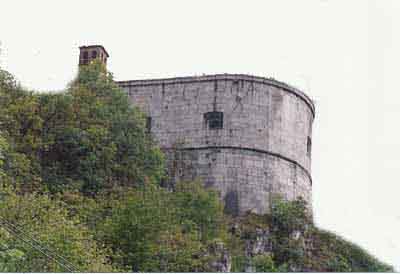 The Fortress at Anfo

The Anfo Fortress, a military structure re-built by Napoleon on a former structure, is a reminder of ancient times. It is a unique example of its kind in Europe, with its eight camouflaged and interconnected forts dug out in the mountain at various heights dominating the road between Trento and Brescia over the Lake Idro ( Brescia province). On April 11, Vukassovich took the Rocca d’Anfo on Lake Idro, then advanced to Fusine and Lavignano near Brescia. His Avant-Garde led by Colonel Prodanovich occupied Goito, Roverbella and Marmirolo. On April 12, Vukassovich took Castel Belforte, Bigarella and the right bank of the Molinella. General Elsnitz cautiously advanced on the Mantua plains with 11 battalions and 8 squadrons. General Sommariva was ordered to siege Peschiera and put 3 battalions  at Monzambano, with outposts on Lake Garda until Goito, deploying 1 battalion And 2 squadrons. as garrison in Castelnuovo and Cavalcaselle.  Colonel Schröckinger was sent from Mozambano to Ponti to block Peschiera on the Mincio’s right bank.

The Verona OoB’s numbers were from Clausewitz. These are from Miljutin.

On April 8, 1799 Oberst Carl Rohan personally led the attack against the French outpost of San Antonio (Lake Idro) supporting the successive attack up to the steep rocky climb of Rocca d’Anfo. Carl Rohan, then, was charged to secure the right flank of the Vukassovich main column which was marching towards Brescia. 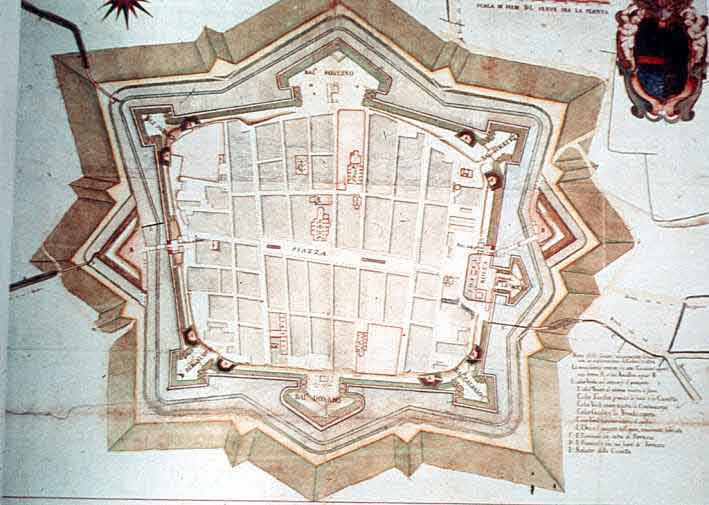 The Fortress at Orzinuovi

Orzinuovi traces its origins to 1193, when  Brescia’s people decided to erect a fortress in this strategic location near the Oglio River. In 1520, Venice entrusted the architect Sammicheli with the task of making the citadel invulnerable; it took the form of a five-pointed star with seven ramparts. Of that powerful complex, today there remains only the Rocca (1477), a work of the military architect Giovanni Borella; now in restoration.

It was attacked by count Alcaini Gruppe on May 1, 1799 and  the garrison (Cisalpines and some French) surrendered (500 men + 100 wounded, recovered in hospital) on the same day. Graf Alcaini took the 40 guns of the fortress. Alcaini had 7 battalions . And 2 squadrons. He spent the rest of the campaign with troops of Vukassovich, Strauch and Rohan.

Another commander from Tirol’s Army: 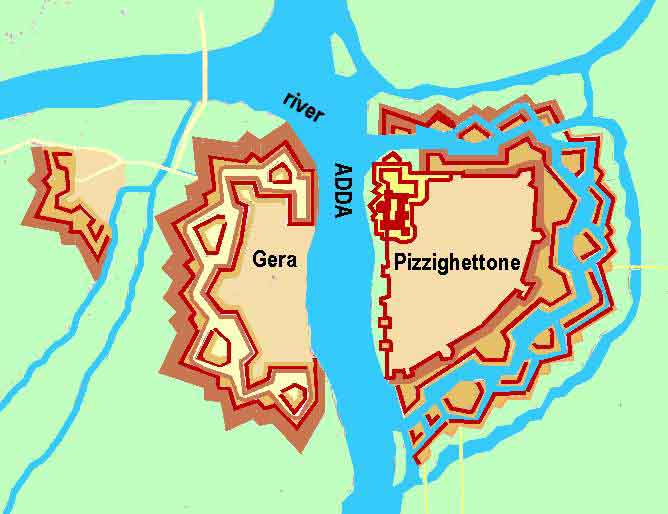 If the River Po was the principal line of defence, the Pizzighettone-Cremona-Piacenza triangle, with Alessandria to the left and Mantua to the right, would provide effective defence of this line and enable the army either to wait in security for the arrival of distant allies or if need be to advance offensively in the decisive plain between the Sesia and the Adige. The base of the “Gera public square” was constituted in the period of half XVII century, in 1654, during the 30 Years War, when Lombardy was an Habsburg of Spain dominion. Planned by the mathematician Alexander Champion, at the service of the Governor Luis de Benavidez Marquis of Caracena, the Fortress of Gera supported the Fortress Pizzighettone, a bridgehead erected in order to control the passage on river Adda and communication between Cremona and the rest of the “Milanesado”. The fort was rebuilt many times in the 1600s  and the 1700s: in particular, during the Austrian dominion, between 1720 and 1725, under Emperor Carl of Habsburg, when it obtained the current conformation. On May 11, 1799, the fortress was bombarded by Austrian artillery for a full day  and surrendered in the early evening.

Pizzighettone Garrison after the Fortress Was Taken – May 20, 1799

[1] Marquis François de Chasseloup-Laubat (August 18, 1754 – October 3, 1833), , was born at St Semi. ( Lower Charente), of a noble family, and entered the French engineers in 1774. He was still a subaltern at the outbreak of the Revolution, becoming captain in 1791. His ability as a military engineer was recognized in the campaigns of 1792 and 1793. In the following year he won distinction in various actions and was promoted successively chef-de-bataillon and colonel. He was Engineers chief at the Mainz siege in 1796, after which he was sent to Italy . There he commanded and organized the lines’ positions of Bonaparte. He was promoted general-de-brigade before the end of the campaign, and was subsequently employed in fortifying the new French Rhine border.

His work as Engineers’ Chief in the army of Italy (1799) had good results, and he was made general-de-division after the battle of Novi. When Napoleon began his new campaign in 1800 to retrieve the 1799 disasters, Chasseloup was again chosen as the Chief of Engineers. During the era of peace (1801-1805) he was mainly ordered to reorganize the defenses of northern Italy , and, in particular, those ine Mantua’s area. His masterpiece was the large Alessandria fortress by the Tanaro River.

In 1805 he remained in Italy with André Masséna, but at the end of 1806, Napoleon, leading the Polish Campaign, called him to his Grande Armée, with which he served during the campaign of 1806-07, directing sieges at Colberg, Danzig and Stralsund. During the Napoleonic domination in Germany , Chasseloup reconstructed many fortresses, in particular Magdeburg. In the 1809 campaign he was again in Italy . In 1810 Napoleon made him a State Advisor. His last active campaign was the Russian of 1812.

Retired from active service, in 1814 he was occasionally engaged for inspections and construction of fortifications. Louis XVIII made him a peer of France and a knight of St Louis. He refused to join Napoleon during the Hundred Days, but after the second Restoration he voted in the chamber of peers against the condemnation of Marshal Ney. As an Engineer, Chasseloup was a supporter of the old bastioned system, though with some modern views,. He followed in many respects the works of the Engineer Bousmard, published in 1797 and who fell, as a Prussian officer, during the Danzig defence of 1807 against Chasseloup’s own attack. His ideas were applied at Alessandria, which had many upgrades of the bastion outline, with, in particular, the masked tenaille flanks, which served as extra flanks of the bastions. The bastions themselves were carefully entrenched. The usual “Rivellino” (ravelin) was replaced with an heavy casemated caponier (à la Montalembert), and, like Bousmard’s, the true ravelin became a large and powerful fort built outer, beyond the glacis.

[3] A brigade from the Tyroler Armée was attached as Armée Reserve. (Johann Baptist) Giovanni Battista Reichsgraf von Alcaini was born in Venice on August 18, 1748. On January 24, 1794 he was named provisional major general and confirmed in that rank on February 12, 1794. In 1799 he was 55 years old; from September 1, had the provisional rank of Field Marshal Lieutenant and was confirmed on October 2, 1799. He died on October 8, 1800, from the severe wounds suffered during Tortona siege.

[4] Major General Friedrich Alexander Wilhelm Freiherr von Seckendorf–Aberdar, (2 August 1743 – 11 June1814). Had the provisional nomination to major general from 1 May 1 1794 but on May 30 his promotion was official. He followed FML Wurmser in Italy often employed as Staff organizer, cavalry reserve commander and adjudant. He did not stay in Mantua, but remained in Tirol where he participated to the deployment of the right wing at Rivoli, January 14, 1797, in the place of FML Davidovich. He was with Mélas during the 1799 campaign often performing rearguard or siege tasks. On September 12, 1799 he was provisionally named Feldmarschalleutnant, rank confirmed a month later, October 2, 1799.

Placed on the Napoleon Series: July 2007