During the afternoon of August 14 Joubert, St. Cyr and Moreau rode together along the southern hill of Novi to perform a reconnaissance. It was not clear what happened during that ride, but the large camp of Fieldmarshal Kray at Fresonara probably induced Joubert to assume a more careful plan of attack (in effect almost turned into a defensive plan).

If the French still had some will to attack the Coalition’s army, the French deployment could have been very dangerous. Someone said Joubert did deploy his troops in some inconsiderate way. He did not have an homogeneous army; most of his units were regiments or battalions only on papers, seeming more “current re-enactors units” than military ones. His order of battle was more suitable for a defensive battle than for an attack action. The French line was a narrow dart pointed into Novi with two wings and no center or large reserve behind the town. He almost made his army surrounded by its enemies, imagining the weak Watrin Division could not resist for long time at the Scrivia.

The terrain was very difficult to manage as much of the very cultivated terrain of Northern Italy. The heights were about 200 feet above the plain and covered with vineyards and small, terraced farms. An ordered unit could have easily defended this kind of battlefield, but a disordered, retreating unit had no other option than rout. In addition, behind the southern Novi hill there was a deep gorge (Braghena) which acted as an impassable point, making easy the encirclements by troops advancing in the French left, from Pasturana and the Orba creek.

It was not possible Joubert would underestimate the enemy forces, a large linear army, with such a numerical superiority to be been able to be lined up on two parallel lines, one behind the other. So, having beaten the first line, the tired attack units would have had to bang against a solid second rank of muskets. Joubert’s line somehow remembered that of Rivoli 1797, which the Chief had well mastered and which had the two extreme wings left free to watch the enemy encirclement trial; at Novi, nevertheless, were missing either the Bonaparte genius and the Masséna toughness. Or, maybe, the deployment was chosen by the careful Moreau, who had no hope to gain that battle. The death of the French commander-in-chief left the doubt without any answer, the French lost the operational initiative and Novi seemed to be a lost battle since its start (it was moreover the battle the Directory had ordered to do, making it a political affair).

Suvorov was, originally, the defender and he loved to do so, by forcing the French to advance into the plains. During the whole daylight he rode tensely near Pozzolo Formigaro, up and down without his uniform, in white shirt and underwear for the hot weather, looking for the best engagement formation. He deployed Bagration in front of Pozzolo and Miloradovich behind the town as a tactical reserve. He ordered Kray to take position at Fresonara and Mélas at Rivalta, while Derfelden had to protect Tortona. During the late afternoon he observed the French taking positions on the Pasturana hills, like they wanted to defend the plateau instead of making an advance. At this point the Fieldmarshal returned to Pozzolo and sent new orders to his army: attack! [i]

The Austro-Russian center had to attack the linking point of the French right wing, cutting Watrin away from Novi and Serravalle and eliminating every danger for Tortona. The rest of the army had to follow the movement pivoting by its left, avoiding a frontal attack at Novi and keeping a strong detachment on its right to stop every French advance along the Orba. This was Suvorov’s original point of view.

At this point, however, the history reported something a little bit confused. General Mèlas, for example, in his report after the battle, said his orders were to attack in the direction of Serravalle and not to stay at Rivalta. Another commander (formerly at Mantua) Kray (Kriegsarchiv report of August 17) said he had orders to attack the French left wing and not to wait at Fresonara, having, in effect, received an agreement from the general headquarters at Pozzolo. What was the truth? Too many roosters in the hen-pen? Was it possible the Austrians thought they could act by own initiative?

Maybe Mélas did such a report to mask his “partial” obedience and formal deference to Suvorov’s orders (related to some events which occurred during the battle and on which it will be related after). But Kray? Fieldmarshal Suvorov had a complete control of the Coalition while operating in full agreement with Chief of Staff, Marquis Chasteler, while not always with Mélas. Now he had to argue with another influential Austrian Fieldmarshal and, above all, with another more influential Chief of staff: General Zach, who was the involuntary origin of the aforesaid confusion. All this happened while Suvorov was taking a rest in that torrid day.

Kray had written a message to Suvorov at 11 a.m. where he said he was of the opinion to launch the Austrian right wing into a right-flank attack on Novi at dawn on August 15, hoping to hit the French when they were the march to Tortona and so cutting th communications with Genoa. This letter crossed with another dispatch sent to Kray by Suvorov’s chief of staff Zach from headquarters at Pozzolo Formigaro at 9.45 a.m.:

“The enemy have seized Novi. The column which had been operating against Lieutenant-General Bellegarde has now mostly crossed the Orba and united with the enemy column at Novi, which means that only a weak screen remains along the left bank of Orba. If Your Excellency would throw it back and could march at once on Novi, you will not only take it with no great difficulty, but reduce the enemy to a fearsome state of disorder.

The enemy’s target is to relieve Tortona—one of the columns is advancing by way of Novi, and the other across the Scrivia against Sarzano and Monte Goldone. Write to tell me of your intentions and your time of attack, and we will advance simultaneously from Rivalta di Scrivia. The field-marshal is asleep; I am riding to see the general [Mélas]”.

Suvorov, awaken and refreshed, maybe realized it could be a good plan, not in contrast with the fake-attack-cover-the-left directive he had in mind for Kray:

“I am more than pleased with your proposal to attack the enemy with all your forces at first light tomorrow the 15….”

The Fieldmarshal agreed and the Austrians realized they could have a certain degree of initiative. On 20 PM in the evening, at sunset, Kray moved his corps, divided in two large columns. It was deployed in the night (at midnight the French performed an heavy artillery fire against the Austrians), ready to attack at dawn, as stated.

From the extreme right (Orba creek) to left

3rd Light Dragoons and 2nd Hussar Regiment were listed under Pálffy in Mélas Korps, by Wucherer 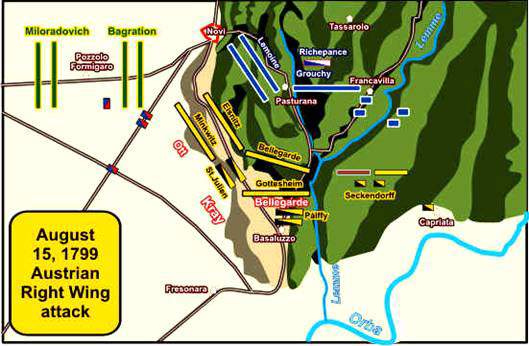 [i] He probably was sure that a strong wing attack could have engaged also the French reserves. Some authors told Suvorov wanted a central attack with the Russians, when the French center would have weakened because on the wing attack. However it seems he, really, hoped the French left wing could be pushen downhill, in the plains, where the Russians (artillery and Cossacks) could destroy easily the Republicans, now in open fields.

[ii] Freiherr von Wucherer, “Die Schlacht von Novi am 15. August 1799, eine Ruhmesthat des österreichischen Armee”, in Organ der Militärwissenschaftlichen Vereine, Band LIX, Wien 1899. The orders of battle came from the Archiv of the Reichkriegs Ministerium papers (ordre de bataille vom 8. August 1799) and probably listed the “on duty” numbers, while Miliutin gave the numbers (generally lower) of those fit to combat. This article represents a fine summary of the previous jobs (Jomini, St Cyr memoirs listed by the author as giving an unreliable OoB, Stutterheim). The presence of units not listed by the above authors comes from Austrian and French military histories and are confirmed by some memoirs.

[iii] Miliutin numbers are sometimes calculated by dividing the totals of the units (i.e. cavalry).