The 1799 Campaign in Italy: The Last Battles & the End of the Directory’s Wars August-December 1799

The Revolt of the Army and the Clash at Torriglia

On December 5, at Nice, the 3rd Chasseurs received orders to leave for Hyères but the cavalrymen, having not had their wages since eight months, rioted saying they would marched only after having received their pay. Championnet, personally reviewd the situation but the Chasseurs became so rude with their Chief, that he was forced to disband the regiment and to change its number. Of the 3rd Chasseurs remained only some companies of 15 men each (officers included).  The men were sent to the Navy and the horses divided between the 10th Hussars and the 14th Chasseurs. On December 17, the 63rd Line infantry and the 17th Light infantry (Lemoine’s Division) left Millesimo and Cosseria positions, returning with flags and drums to Nice. They were followed by the 10th, 34th, and the 105th Line, and on the day after Christmas, by the 24th Line, 14th and 68th Line (Miollis’ Division). The mass desertions spread throughout the Ligurian territory, with troops leaving their positions in perfect march order and with their officers abandoned in the trenches, defending the lines.
While in this deep trouble, St.Cyr found the time to win his last battle in the Riviera. The first attack, however, was organized by Prince Hohenzollern. On December 6, the Austrians attacked Novi with Colonel Frimont’s Brigade (the Fröhlich Regiment and two 5th Hussars squadrons) causing a fast French retreat, without any resistance. Six Bussy Jäger squadrons and one Klebek Battalion pursued the French until Gavi. The fort was surrounded and some Austrian patrols harassed the enemies driving toward Borgo dei Fornari, in order to cause fatigue and alarm the Bocchetta detachment.

Mélas had previously weakened Hohenzollern’s Division sending 6 of his battalions to Reggio, under General Eder [i], which had orders to join General Fröhlich in the Papal States; this task force was formed also by the Cavalry brigade Nobili. The commander- In-Chief, however, agreed with the prince’s idea for a trial to capture Genoa by surprise; so he substituted the six battalions sent to Reggio with other six units of the main army. Klenau was aware of Hohenzollern’s plan against la Bocchetta (the x-day was fixed for the 15th of December) and prepared himself to attack Genoa from the East. He gathered his troops at Chiavari (December 12) advancing through Cicagna and Rapallo.
On December 14, General Klenau, deployed along the Lavagna valley, attacked the weak Miollis force at dawn, hitting Sori, Monte Cornua and Torriglia. The offensive plan foresaw an ascent on Mount Cornua,[ii]  (also known as Monte Corona), made by light troops. The first attempt by D’Aspre’s Brigade was made on December 14 but the climbing was so difficult that only a small force made it to drive out the French. The attack was repeated on the 15th with Croatians of the 2nd Banal Battalion and the Piedmontese Jäger Battalion Von Brentano. With great sacrifice the troops climbed the slopes and went over all defensive obstacles built by the French. It was a success, the steep Monte Cornua was climbed by the Jäger; they conquered the top and forced the opponents to withdraw and to rally at Nervi, and 100 French were made prisoners.
In the meanwhile, the attacks on the center continued. Major Paulich marched through Scoffera up to the top of Monte Capenardo. The first Klenau’s Column seized easily the village of Torriglia, while the second column advanced along the coast and the Corniche road toward Nervi. 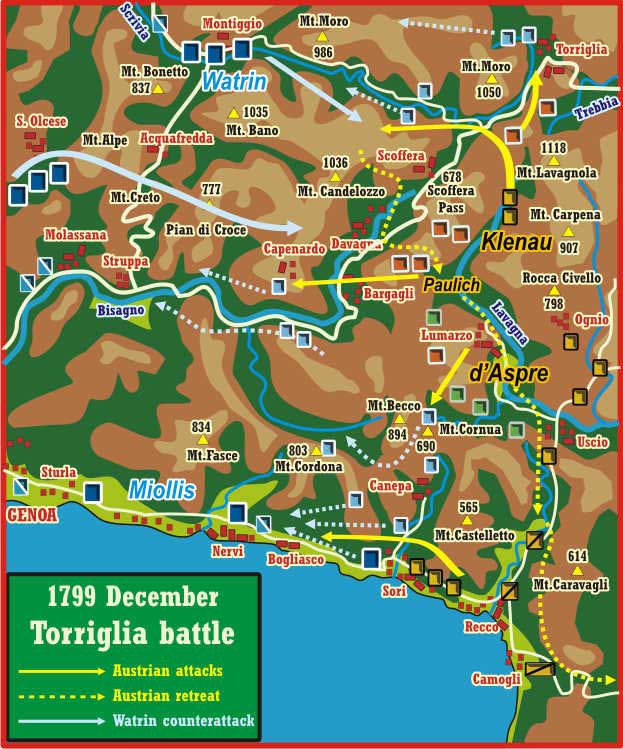 As said, Klenau’s attack had to be supported by the intervention of Hohenzollern, who had to advance from Novi and to assault la Bocchetta Pass. The right flank of Klenau, however, remained motionless. In fact, Hohenzollern, who was waiting for the six Battalions promised by Mélas, had intended to do only diversionary attacks, at least until the arrival of his reinforcements.[iii] By December 15, however, the repeated assaults of Klenau had driven away the French under the Genoa walls and the combats lasted till the night. Klenau had had a generic Genoese agreement (General Assereto ?) according to which, seeing the Austrians near and once caught up the city doors, the Genoese civilians would have begun to riot and would have dropped the Republican garrison outdoors. In Genoa, however, nothing occurred.

On December 16, well before dawn, Klenau observed a French column marching on Monte Creto. They hit frontally Major Paulich’s troops, to whom had been charged the task to link with Hohenzollern and were still were on Mount Capenardo. Paulich was overrun and severely wounded, falling prisoner with a large part of his troops. The French column then drove toward Scoffera and Torriglia, threatening the flank and the rear of the Austrian detachment. This forced Klenau to lead personally a column in the Bisagno Valley, to intercept the French. He engaged the French at Scoffera but they (General Watrin’s column) gained Mount Portello, near Torriglia, which Klenau was forced to cross. When this occurred, Klenau was charged with bayonets and requested to surrender. His answer was a counterattack, meter after meter, on every bit of ground and obstacle, a violent  melée occured, and after six hours of chaos, the French were routed. Part of the French went back to Genoa and part recovered in the Scrivia Valley. Klenau rallied his soldiers at Davagna and returned in full order to Chiavari. The only support Hohenzollern had granted to that unlucky operation was to deploy four field artillery batteries at Gavi and to send some patrols ahead, which reached the Genoa walls in reconnaissance. Along the coast, however, all the French right wing was directed against the opponent troops and the Austrians were forced to retreat. At Sestri a French attack was frontal and decisive, because Klenau had no more troops to commit (only 250 Jägers and a Grenz Battalion remained as the outpost). The Austrian General abandoned the Levante and recovered to La Spezia, organizing there the remnants of his Corps: an “Unterstützung” reserve at La Spezia and the main body at Sarzana. The Austrians fought well, routed the French in the center but lost the battle and over 1200 men, wounded or prisoners (Austrians sources gave higher numbers: 92 dead, 240 wounded, 1795 prisoners).

At last the Austrians organized their winter-quarters also in Riviera and in the Novi sector. The link between Klenau and Hohenzollern remained at Ottone; the Hohenzollern’s outposts were at Rocchetta, Arquata, Gavi, San Cristoforo, Rocca Grimalda (Ovada) till Spigno where they linked with the Elsnitz vanguards.

What really gave the final blow to an army, already condemned to death, were the epidemic diseases. The city of Nice, now in France , was hit by a terrible epidemic, caused by the evacuation of the military hospitals. Thousands of wounded patients, weakened by the lack of food, laid packed one near the other along the sea coast. Nice became the main reception area of the infection. The epidemic soon caught also the civilians; the corpses multiplied to such a point, as there was no more enough space for burials. This plague began its devastation in Nice by the middle of October 1799; it increased gradually in violence and pestilence, reaching its zenith at the end of January 1800, while beginning to decline in March. The people gave it the terrific name of plague, but it was typhus fever, born among the wounded and spread from hospitals. The symptoms of the disease, usually, were preceded by a violent headache, followed by vomit, shaking shivers and high fever with delirium; the more the constitution of the affected people was strong, the more its progress was fast and violent.
At the end of 1799, the army command was given to the renowned General André Masséna, who had saved the Directory at the battle of Zürich. The veteran chief agreed with some doubt (he remained two weeks in Paris searching for money to help the army of Italy ) … thinking at the absolute lack of supplies, at the renewed bravery of the “barbets” now against very weak enemies, at that Typhus pestilence. The old Chief waited for his successor at Sospello, then fell sick and asked to be carried at Nice. For eight days the medical staff of the capital hoped to rescue Championnet, but on the 9th day came the delirium. The general continued asking if the vessels full of grain had disembarked the supplies at Marseille, sometimes crying and saying “the soldiers need them … need them”. He sat up on the bed asking if the ships had carried money, clothes, if the soldiers had had their wages, if they had routed the Austrians …”let us leave Nice” he said “this town will be deadly for us … rather I’ll prefer to die, if I must do so, like Joubert on the battlefield. Poor my mother, she will not survive to this sorrow … I implore you to console her, and to give the new with caution to my father …”

The old warrior of the Alps and of the armée d’Italie, he who had conquered Rome and Naples, died, on January 9, 1800, not for the pain and the shame of his last defeats, like someone for a long time continued to assert, but because of a Typhus fever. His body was to be carried to Paris, at the Pantheon, but the decay was so rapid, that the corpse had to be buried in Antibes, into the Fort-Carré where Championnet had his final rest. Not too far, at Valence, his native town, someone erected a monument to him.

Artillery “canonniers volontaires” – with the division

“Sèdentaire” artillery – along the Coasts

The Austrian Army in Italy at the beginning of 1800

[i] Generalmajor Franz Eder von Hartenstein was in campaign as Oberst commander of the  28 Frölich. On 2.10.1799 he was named provisional Generalmajor, rank confirmed on 29.10.1799. He left the regiment’s command to the Oberstleutnant Paul Candiani de Ragaini, which led the regiment with a provisional rank during Eder’s sickness in the first months of the campaign (Battalion commanders Major Josef Reinwald von Waldeck and Major Ludwig Thiery). Eder died on 11.2.1807.

[ii] There is a bit of confusion regarding the Italian names inserted in the French defensive system. One of the most important outpost, near (and above) Sori was the monte Cordona, a 803 m high hill often called monte Corona in the actual reports. However, that mistaken name, was also given to the monte Cornua, which was not the highest mountain around Genoa but the hilltop with a broader horizon (so the best observatory at all). During the combats of December the reader must consider the attack against Monte Corona, as against monte Cornua (m 680, correctly spelt by the Austrians), while the attack at Sori was really an assault against the monte Cordona lines.

[iii] As for the truth, Hohenzollern had sent an Officer (as a courier) to Klenau, a rider carrying the news of the impossibility to attack the Bocchetta and of the necessity to wait the six substitutive Battalions. Therefore his ride was brutally hampered by the snow and the rough roads, so he reached Klenau too late to stop and to delay the operation.

[iv] Général Jean Antoine Marbot (1753-1800) Born at Château de Lariviére (Corrèze). A well educated and gentle nobleman. As second-lieutenant he was in the Royal King’s Guards. In 1781 the Count of Schonberg named him Captain in his Dragoons regiment. In 1793 he was named general-de-brigade (August 30) however “à titre provisoire”: (Confirmed on October 7, 1793). In 1795 he became general-de-division (June 13). In 1799 participated to the Italian Campaign as général-de-division in the Alps Corps, from September 9. Finally, in 1800, he had the command of the Reserve Corps of the Armée d’Italie.