The Position of the Coalition’s Army before the Battle

Road from Caprino to Lecco

French Army positions before the Battles

from Lecco to Trezzo

from Vaprio to Villa Pompeiana

from Villa Pompeiana to Robecco

from Robecco to River Po 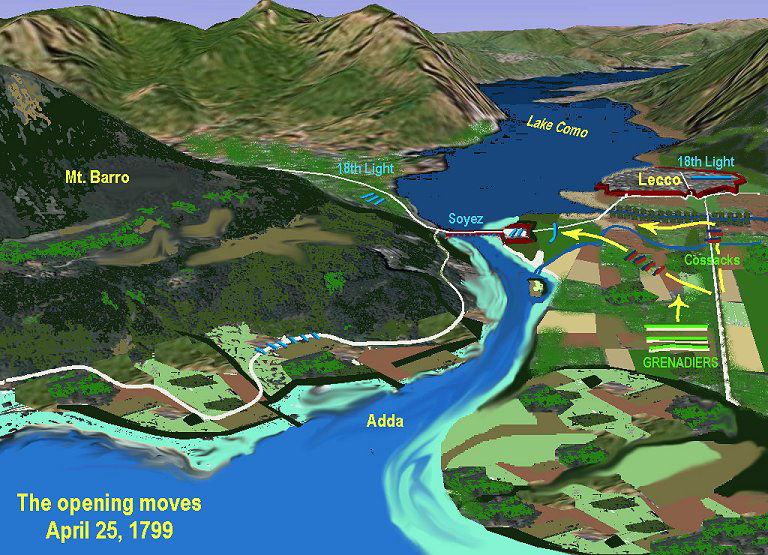 On April 25, 1799 all the French army was behind the Adda River. General Jean Marie Moreau had the task to defend Lodi while the other divisions took positions along the right bank of the river. The headquarters, initially placed at Lodi, was transferred to Inzago, in a more central position. Having received the news, that the Cisalpine Directory had abandoned Milan,   General Barthélémy Louis Joseph Schérer decided to reach the city. Moreau was sent to Inzago to take provisional command of Army HQs. Escorted by 20 guides, Schérer reached Milan. There he did not find the authorities he hoped to see, but he met Rivaud who gave him the French Directory’s letter of his dischargement. Schérer immediately resigned and did not return to Inzago where Moreau agreed to be his replacement [1]

Bagration, repulsed on 25 near Bergamo, rallied his troops. Suvorov and Rozenberg organized a three column  formation near Ponte San Pietro: the first was a battalion belonging to Rozenberg’s corps, the second the Dendrjugyn Grenadiers, and the third was the Miloradovich Brigade deployed as a second line. Between the infantry were Cossacks. Rozenberg’s troops followed as a reserve.

April 26:  At 2.00 PM hours, the Russian vanguard contacted  Soyez’s Demi-brigade, which had just been replenished with fresh recruits and had been given the mission of the rearguard. Soyez’s Chasseurs fought and disengaged but, at 4.00 PM a French guard of about 150 chasseurs was ovverrun by Cossacks, who ran against a small redoubt in front of Lecco. They were met with a salvo of 25 canister shots which   thinned the riders’ rows  and caused great disorder. Too late to engage the infantry, because night was  coming, Bagration resolved to wait for the next day.

The Battle of Lecco

Lecco. The alternative, and more difficult, way to reach Milan  from Bergamo passed through Lecco, on the lower right branch of Lake Como.  There was an ancient bridge near Olginate   which   cross the Adda. Nearby two roads surely existed: one to Milan and one to Como. In 1784, Joseph 2 of Austria visited the town and decided to demolish the town walls. With the arrival of Bonaparte and the birth of the Cisalpine republic, in 1797, the Lecco land was enclosed in the Mountain Lombardy Department ( Lecco became the chief town). In 1799 the bridge over the Adda, south of Caldone stream, was near the village of Pescarenico, where the battle occured.

* Numbers and dislocations are estimated.

At Brivio. It is a village built on the Adda river where the hills leave the land to the plains, dominated by an old square medieval castle and situated 15 km far from (south of) Lecco.

At Verderio.   On April 1799, the French division Sérurier entrenched into the Villa Confalonieri (today Villa Gnecchi-Ruscone), into the Castle and the cemetery. Surrounded by the Austrians, it was defeated and removed from the rosters.

The 1st Battalion  lost its flag after the battle of Vaprio. On May 6, 1799, Peschiera surrendered and the Austrians captured a flag of the 21st  Demi-brigade, which was there with another battalion

Prince Bagration took part in many campaigns, wars and battles. In the campaign of 1794, Bargation showed himself as a brave cavalry commander. Suvorov thought highly of his skills, bravery, enterprise and accuracy of his command. The military service under the command of Suvorov had a major  influence on the forming of Bagration’s military skills. As a Major General Bagration took part in the Italian campaign of Suvorov in 1799. He commanded the vanguard of the Russian troops. He stormed and seized towns of Brescia and Lecco and executed the most important missions in the battles at Trebbia and Novi. In the well-known Swiss campaign of Suvorov in 1799, Bagration commanded the Russian vanguard, he was the first who accepted the enemy blows when the Russian troops crossed St. Gotthard, the Devil Bridge and others. During the retreat of the Russian Army he commanded the rear-guard, covered the retreat of the main forces and contained the attacks of the outnumbered enemy forces (the Panix mountain ridge). In the Swiss campaign Bagration was Suvorov’s most reliable support. For his courage, bravery and military skills he was rewarded with many Russian and foreign orders and arms: including the gold sword decorated with diamonds with the inscription “For courage”.

Denissov Tichon Ivanovich (b. 1749) from 1793 to 1797 Lieutenant Colonel, regiment-commander of Ekaterinoslaw Cossacks Battalion.

April 26, Night. The Russian were masters of the left Adda’s bank. Sérurier, seeing a threat at the Brivio passage, detached Adjudant Général Guillet to cover his northern flank.

April 27, Dawn.  Soyez is in Lecco. The walled town of 4000 inhabitants is at a distance of 400 meters from the Adda’s stone bridge, a fortified 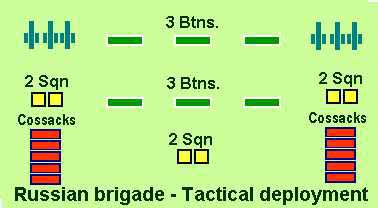 structure  100 meters long. The Russian moved forward at 8.00 AM but their advance was harassed by the Lecco’s pieces and definitively halted at 10.00 AM. Bagration decided to wait for the planned Austrian diversionary attack at Brivio. Soyez sent the two Grenadiers companies  south, to cover his right flank in direction of Olginate.

April 27, 2.00 PM. Rozenberg’s Grenadiers advanced against Lecco but were sent back by the Carabiniers of 18th Demi-brigade. The melée  was very bloody (Rozenberg’s battalion lost 150 men dead and 360 heavily wounded). The  French were the victors, however they began to have a shortage of ammunitions and withdrewinto the town walls. At 9.00 PM   a courier arrived bringing a message from Guillet. It was the news of the massive Austrian deployment along the Adda. Guillet said he had to withdraw to Como and left Soyez free to decide to do whatever he wanted. Soyez realized that his right flank was cut off from the Army center and ordered the retreat, in echelons, in order to save as many troops as possible.

At 11.00 PM only the 18th Légère remained to guard the Adda bridge, the others were already retreating towards Erba and Como. Before dawn the 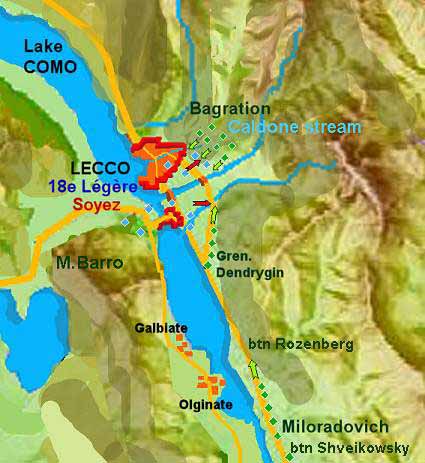 class=MsoEndnoteText Demi-brigade embarked on 28 boats and the bridge was destroyed by Soyez’s sappers. (The 18th Demi-brigade crossed Lake Como and continued its march towards Lugano in Switzerland without any losses in men, materials and guns). From Lugano, where they blocked a people uprising, the bemi-brigade went by  the way of Lake Maggiore; other boats were requisitioned and the French disembarked at Arona, on April 30. There Soyez had orders to reach Lavino, on the road to Novara and there he got the news, on May 1, of  Moreau’s defeat at Cassano.  S of April 26

The impatient Field Marshal, on April 26, had planned that, while Bagration   attacked Lecco, forcing the Adda passage, and sending a strong Avantguard to Como, General Vukassovich would gathered as many boats as he could   in order to pass the river at Brivio, during the oncoming night. Ott’s and Zoph’s Divisions, with a 3-days food reserve, had to reach San Gervasio and San Pietro to finda good position to install a pontoon, near Trezzo. The avant-guard had to direct itself north, from Trezzo to Vaprio and to join with Vukassovich. The main columns and the rear-guard had to go south towards Cassano. Melas, with the Fröhlich division, had to take contact with the French Cassano bridgehead or Pritorto entrenchments at Cascina Franca and attck them. Count Seckendorff had to move, on the evening of the 26th, towards Lodi attacking that bridge and trying to concentrate the French attention on that city while Prince Hohenzollern, after sunset, had to send patrols under Pizzighettone walls, reaching himself the meeting point of rivers Adda and Po. There he sent spies to spread the false news of the Austrian will to conquer Piacenza.  At dawn on April 27, he bombarded the Adda fords and the right Po River bank from Monticelli to San Nazzaro. Suvorov marched with the Austrian 2nd Colonum (Ott), masked by a very dark night in which the wind hampered  the sound of moving troops.

After having gathered many river boats, Vukassovich sent his vanguards to the other river side and found the parts of a French pontoon bridge equipment, abandoned by Sérurier. Austrian pioneers used it to construct a bridge pontoon across the river. Vukassovich’s  patrols went north towards Como; a detachment led by Major Lettnitz engaged the French rear-guard at Olginate and repulsed it.

[1] Officially Moreau received the Directory letter from a Courier (a letter similar to that of Schérer) on April 26, when the French front line was already pierced. He, coming from Lodi, didn’t know the exact deployment of the Armée.

[2] Included the Guards of Light demi-brigade now under Fresia command.

[3] Prince Petr Ivanovich Bagration (1765 – 24 September 1812, Simy) joined as private the Astrakhan Infantry Regiment in 1782 and participated in a number of campaigns on the Northern Caucasus in 1783-1787. He served under Alexander Suvorov in Crimea and distinguished himself at Ochakov in 1788 and was promoted to captain skipping the rank of sub lieutenant. Bagration was promoted to ensign [praporshik] on 9 July 1787, to captain on 18 December 1788 and nominally given rank of sub lieutenant [podporuchik] on 9 July 1789. In 1789-1790, Bagration served in Gregory Potemkin’s staff and participated in negotiations with representatives of Ali Mahmud Khan of Persia . He also served as adjutant to various generals, including Count Ivan Saltykov and Johann Hermann, who commanded Russian troops in the Caucasus. In 1790, he participated in the campaign against Chechens. By early 1792, Bagration was transferred to the Kiev Horse Jager Regiment and promoted to second major (9 July 1792) and then to premier major (8 December 1793). On 15 May 1794, he was transferred to the Sofia Carabineer Regiment and served in Poland in 1794. In late October, he led his squadron in a surprise attack against a thousand Polish troops camped in woods with a cannon. Bagration’s squadron captured 250 men and the gun, while the fleeing Poles lost up to 300 killed and wounded. For this success, Bagration was promoted to lieutenant colonel on 27 October 1794. In November, he followed the main army to Praga, the suburb of Polish capital, but he did not participate in the assault because his regiment was assigned to cover the artillery. Bagration was given command of the 1st Battalion of the Lifland Jagers at Volkovysk in the Grodno gubernia in June 1795. After the military reorganization in 1796, Bagration was appointed commander of the 7th Independent Jager Battalion on 28 May 1797. However, his battalion was soon transformed into the 7th Jager Regiment. On 24 February 1798, Bagration was promoted to colonel and, on 28 January 1799, appointed chef of his regiment, now renamed to Prince Bagration’s Jager Regiment. He took part in Suvorov’s campaign in Italy and Switzerland in 1799. Commanding the advance and rearguards of the Russian army, he distinguished himself at the battles at Brescia, Lecco, Tortona, Alexandria, Marengo, Turin, Tidone, Trebbia and Novi in Italy as well as during the crossing of the St. Gotthard Pass, storming of the Devil’s Bridge, actions in Muothatal Valley, Nafels, Netstal, Glarus and the Panixer Pass. For his actions, he was awarded Orders of St. Anna (1st Class), of St. Alexander of Neva, of St. John of Jerusalem, Order of Saints Maurice and Lazarus, Austrian Order of Maria Theresa in late 1799. In 1800, his regiment was transformed into the 6th Jagers (10 April) and Bagration was appointed chef of the Life Guard Jager Battalion on 21 June 1800. Source: Alexander Mikaberidze 2003.

Placed on the Napoleon Series: July 2007