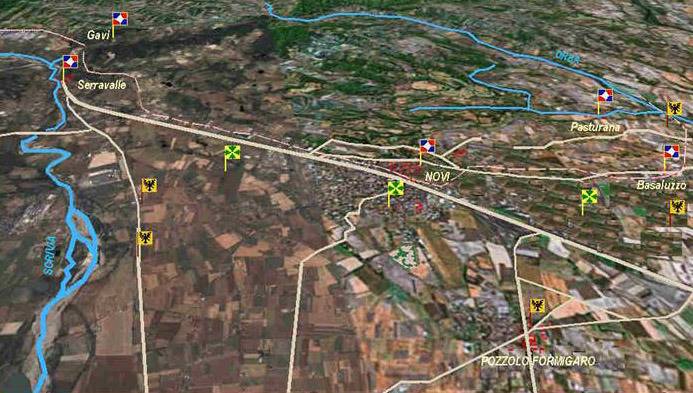 “Some Heroes have unpleasant Fortunes”

After the Novi (Ligure) battle, the French were definitively out of Northern Italy and in that terrible clash found thedeath of the hero of the Tirolese front, the General Barthélemy Catherine Joubert. In fact, the Directory (Seyes), worried about the consecutive defeats, suffered by the French armies, decided to appoint General Joubert as the commander in chief of the army of Italy and to send as reinforcements around 20000 French draftees (conscripts). When Joubert took his command, the armée d’Italie had around 35,000 men fit to fight, while the Coalition army of Suvorov had about 70,000 men. The Austro-Russians, however, were able to deploy only 45,000 soldiers for the upcoming battle. There, Suvorov, was less brilliant than at the Trebbia. Nervous and angry by the Austrian confrontation, conscious he had to leave Italy for political motives, the future prince of Italy (kniaz Italikski) undervalued the French danger, showing an unusual arrogant behaviour. It was reported he said “C’est un jouvenceau qui vient à l’école, nous allons lui donner une leçon “, (He’s a young boy who comes to school, and let we go to give him a lesson!)  speaking about Joubert, being then around thirty years old. Above all, Suvorov, made some tactical mistakes, which could have compromised his numerical advantage. First he dispersed his corps on various directions, without concentrating a one and only large mass of troops, then he allowed all the Coalition army groups (it is incorrect to call them as corps) to gather separately and in different times. Finally, the inaccurate attribution of superior commands (wings and center), clearly caused by the necessity to deploy Austrians and Russian side by side, which created a lot of confusion amid the troops.

The target of the Austro-Russian headquarters was the surrounding of Joubert’s army. In order to do this, it was crucial to block the escape ways through the Appennines.  This would be difficult to realize in the Coalition right wing (through Acqui or the Orba valley), but easier on the left side (the main road of the Scrivia valley and the secondary pass at Gavi).

First Act of a Drama: Serravalle

Serravalle (Scrivia) once known as Libarna was the strategic junction between the Po lowlands and the Ligurian Sea and the tactical control over the main road traffic to and from Genoa. It had an old castle which was destroyed in 1155. During the Second Coalition war, the French garrisoning Serravalle, besieged by the Austro-Russians, were forced to surrender (August 7, 1799).

Gavi – In the years 1626 – 1629 the old Castle of Gavi assumed the characters of a modern fortress, by the amplification works planned and directed by Vincent of Fiorenzuola. Toward middle 1700 the fortress of Gavi was for a short period under the Austrian dominion. During the Napoleonic period it was a theater of battle between the French troops and the Austrians. The fortress could lodge a garrison of about 1000 men. The fortifications on the near Monte Moro were finished between the end of 1600 and the beginning of 1700.

The ancient fort of Serravalle (Scrivia) was the key for the defense of communication routes to Genoa. Serravalle was seized by  Coalition troops on August 7, after two days of bombardment. It was a really easy affair to manage. While Prince Bagration moved back to Cassano Spinola, the fort was garrisoned by companies of the Stuart and Fürstenberg Austrian Regiments.

First Moves – Joubert is Unaware of the Surrender of Mantua

General Joubert was strongly convinced and motivated to give battle against the Russians, considering the Austrians dispersed in sieges and multiple garrisons.  His first objective  was to free Tortona blocking the road that connected the enemy troops between Mantua and Alexandria.  In July, he summoned a war council with Generals Moreau, Gouvion-Saint-Cyr, Pérignon, and Dessolle. All there agreed unanimously to wait, before acting, the arrival of the General Championnet, who was to emerge from the Alps with a new army. Should Suvorov  oppose this last movement, it was decided General Pérignon could operate with a body of 12000 men to support  Championnet in the Stura Valley, facilitating the link with the Army of Italy, at Mondovi and Acqui.

On the other side, if the chief of the Austro-Russians decided to go himself against the new army of the Alps, and whereas would have left an observation Corps of the Rivers Orba and Scrivia, Championnet could lure him into the mountains by yielding ground to him.  During this time Joubert would free Tortone, go to Po, and even to try the passage of the great river, which would force Souvarov then to abandon Championnet and to run back to help Lombardy, where he had all his depots. If the Field-marshal did send towards Turin all but a detachment and continued to cover Tortone, the council wanted to try to attract the “Generalissimo” into the mountains, with delaying actions.  There Suvorov, not being able to use his copious cavalry, would be obliged to fight against the French infantrymen with all the disadvantages of a rough ground. Such was the decision of the war council held by General Joubert; and this decision was the wisest of all, for, as it took place, the French army was hardly above 40000 fighters, and could not receive, before August 20th, the reinforcements of the Army of the Alps.

But, while recognizing  the wisdom of the generals, Joubert though it would be impossible to follow them. Since the surrender of Alexandria and Mantua, Suvorov (or probably the Austrian Hofkriegsrat), determined in his plan to leave no fortified town behind, and to have a complete control of all the country to his rear country, before advancing against Genoa state or the French borders, strongly raised the tempo of the siége of Tortone and stiffened the forces very closely. He restricted himself to observing the French outposts at the beginning of the gorges of the Apennines, and had posted the Klenau division at the gate of the East Riviera, giving to Klenau the order to seize the Forts Lerici and Sarzana and all the defences of the Gulf of Spezia. These last operations were successful, so the French did not have any strongholds, in the gulf, other than the single post of Santa-Maria. [i]

The Directory, which knew these details, had immediately ordered Joubert to attack Suvorov and to make all efforts to free Tortone. This order was so imperative, that Joubert did not believe he could ignore it, unless he resigned his command. He reluctantly gave up the operations plan which had been decided in the council he had summoned in July.

General Saint-Cyr had the command of the right wing. General Pérignon commanded the left, and received orders to go ahead. This General at first occupied the position of Millesimo, known for the 1796 battle, and advanced until Murialdo and Calissano, near Ceva, to clear the valleys of Bormida and Tanaro. Unfortunately, Ceva had been taken by the allies. The commander of this place, accused of laziness and treason, had been judged and shot at Genoa. The right and the center of the French army, passing from Montenotte to Campofreddo, advanced its outposts in the Erro valley and in that of Orba, extending the screen till the Scrivia, with the central strong point chosen with la Bocchetta. Joubert had his headquarters in Campo-Morone, in the rear of his left, between Montenotte and Savona. He was determined to make, very soon, a general effort against the allied army, thus forcing  Suvorov to lift the siége of the Tortone Citadel. On 8 and 9 August, his right advanced on la Bocchetta, and occupied the position of mount Brisco, above Mornese,  which had  been abandoned by the allies.

The Coalition army’s camp was at Bosco, near Alexandria. There, Fieldmarshal Suvorov and the other Staff officers, were busy putting into action their plans for the offensive against the Ligurian Passes. An official authorization from Vienna was awaited (the time for a quick answer was to be predictable around August 10). There were some differences between Mélas (he wanted Genoa) and Suvorov (he wanted to drive directly towards Nice), but all agreed that it was the proper moment to attack. Therefore a possible French attack (knowing Moreau’s difficulties in men, munitions, food, clothes and money) was very far from all Coalition minds and totally unexpected. Nobody had yet realized the presence of General Joubert, known since few days, at the Bocchetta Road. After the Mantua capitulation, Suvorov had ordered Fieldmarshal Kray to leave 5000 men at the fortress, to send other 5000 men with Klenau (actually in Tuscany) and to march with the 18000 men of the main Corps, towards Tortona. Kray’s Corps was waited until 16 August, but by August 11, the cavalry vedettes brought the news of Kray’s arrival. The Austro-Russian offensive was arranged to start by August 15th. In the meanwhile Suvorov moved some pieces on the chessboard: Corps Rozenberg was transferred from Broni to Vighizzolo (Viguzzolo), the outpost were organized at Arquata and, obviously, at the Serravalle fort, Bellegarde Corps was sent to Gamalero on the road to Acqui by August 9. Moreover, in those days, the main group of the French army was signaled as being between Savona and the valleys of Mondovì and Ceva. [iii]

The 4th Column was that of FML Kray.

Oberst Sebastian Prodanovich or Brodanovich) from Regiment of Rumenian Banat

[i] Santa Maria Fortress, a 1600 military building located on a promontory in front of La Spezia (a future part of the Navy Arsenal port) was a stronghold very hard to seize. It was destroyed on March 1814 by the Anglo-Neapolitan fleet and ruined with its garrison of 68 French.

[iv] The provincial Piedmontese units were recalled by Suvorov with a proclamation of June 2, assuring that they would not have been employed out the national territory. The call was successful, probably also thanks to the duke of Aosta presence in the national territory, but its political effectiveness was partly weakened by the Regency order to activate immediately 10 regimental centuries (a century about 100 men) to admit, within July 25, to the Austrian forces. To this manifest lack of enthusiasm, the government answered constituting the reserve regimental companies. The reconstitution of the regular infantry was well more hard-working. In June 1799 (Guardie and Piedmont) were formed in Turin 2 centuries, 3 companies (Monferrato) at Chieri and the century Savoia recovered from Tuscany. They immediately followed the companies or centuries of the other national regiments (Saluzzo, Aosta, Marina, Alexandria, Regina, Lombardy and Light infantry) united to the various Austrian divisions.

On July 23, it was officially created the “Corps of Piedmontese artillery.” The corps was recruited only partly with provincial elements, recovering, in December, also the 107 ordnance artillerymen, come from Switzerland, under colonel Cappello. The austro-Russians formed also, in the sardinian territory, seven Jäger companies. The recruitment and the command of these seven companies (one Russian and six Austrians, reunited at the end of May in the Feldjäger-corps) was submitted to the Austrian volunteer Oberst baron Phillip Brentano Cimarolli, who fought at Novi with 150 volunteers, former soldiers and officers of the disbanded italian regiment Belgiojoso (IR 44). The century of the old regular regiment of the Truppe Leggiere (Light infantry), commanded by the cavaliere (Ritter) Giuseppe Bonaccorsi, gave life to the K.k. 17 (last) Italienische Leichtes Bataillon (Light Battalion), organized on seven companies, (1 grenadier and 6 fusiliers), and sent to the Mantua garrison after the fortress capitulation. It must be specified, besides all, that this Battalion was the only one, together with the Balegno Legion, to be led by Piedmontese officers.