Many sources refer to an extraordinary event at the end of the French advance into the "United Provinces" (the Netherlands) in the winter of 1794-5. It being a particularly severe winter, a significant part of the Dutch fleet, being icebound near the village of den Helder (at the tip of the peninsula between the North Sea and the Zuiderzee), was defeated and captured by French cavalry and horse artillery.

This is described by a number of 19th Century authors: the Frenchmen Adolphe Thiers Lacretelle, and François Auguste Marie Mignet, the Swiss Antoine Henri Jomini, and the Scot Sir Archibald Alison. There are also a number of paintings or drawings of the event, the most famous of which is probably the painting by Charles Louis Mozin (1806-1862) originally (and presumably still) in the collection in the Palace of Versailles. More recently, A.G.M. Macdonell, in Napoleon and his Marshals speaks of

"(when) the ragged men ... thundered on their horses across the ice to capture with naked swords the battlefleet of Holland". 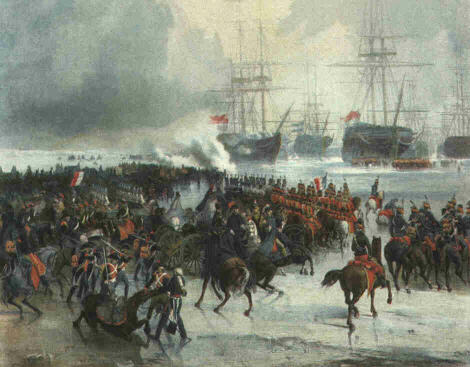 A study of J.C. de Jonge's Geschiedenis van het Nederlandse zeewezen (History of Dutch MaritimeMatters) sheds a somewhat different light on the matter. De Jonge describes the popular version as a myth and a slur on the Dutch nation and character perpetrated by invidious foreigners. After a period of near civil war between Orangists (supporters of the hereditary Prince Stadhouders), Regents (the commercial oligarchy) and Patriots (French-inspired progressives), the Stadhouder, Prince William V, fled the country to Britain on 18 January 1795 when military resistance to the advancing French forces under General Pichegru crumbled. General de Brigade Johan Willem de Winter (a former Dutch naval officer, since 1787 in French service, and subsequently to command the Dutch fleet in the battle of Camperduin) was sent by Pichegru at the head of a regiment of French hussars

His forces arrived in den Helder in the night of 23 January. The next morning (as, apparently uniquely, recorded in the log of the "Dolfijn", one of the Dutch ships), a number of French hussars rode across the ice to the ship of the line "Admiraal Piet Heyn", the captain of which, H. Reyntjes, was the oldest, and thus most senior, serving Dutch officer in the fleet. Ahlé, surgeon on the "Snelheid" wrote later to de Jonge:

"on Saturday morning, my servant informed me that a French hussar stood near our ship. I looked out my porthole, and indeed, there stood an hussar."

These hussars are assumed by de Jonge to have formed the core of the later myth. There is no record (for example from Reyntjes) what was discussed with the hussars, but it is presumed to have been an oral agreement to maintain the status quo until clear orders arrived. Five days later the officers and men of the fleet swore an oath (similar to that already sworn by the men of other ships in the port of Hellevoetsluis) to comply with French orders, not to sail the ships (which remained under the Dutch flag) without French authority, and to maintain naval discipline. This oath was taken in the presence of de Winter, who seems to have arrived in den Helder a couple of days after his troops. On 21 January, two days before the arrival of the first French forces, Reyntjes had received, via Luitenant-Admiraal van Kinsbergen, the Dutch naval Commander-in-Chief, an order from the Council of State of Holland and Westfriesland to all military forces not to attack or resist the French forces. This was followed up a couple of days later by a resolution of the States-General, the parliament of the United Provinces, dated the 21st, to the same effect.

In February 1846, the French Lieutenant-General Baron Lahure published a letter in the newspaper "Echo de la Frontière" in response to the first edition of de Jonge's book. He claims that, being at the head of advancing French forces, he heard, in Alkmaar, that the Dutch fleet was icebound off Texel (the Friesian island opposite den Helder):

"I departed immediately with a company of tirailleurs in wagons and a squadron of light cavalry; before dawn I had taken position in the dunes. When the ships saw us, they prepared their defences. I sent some tirailleurs ahead, and followed with the rest of my forces. The fleet was taken. The sailors received us 'de bonne grace' on board... This is the true story of the capture of the Dutch fleet, devised and executed by a 23 year old Chef de Bataillion".

De Jonge considers that, allowing for some overestimation by Lahure of his own role (he also claims, in variance with the record, to have taken the town of Haarlem single-handed), this version is not really in conflict with his own. Lahure does not actually state that fighting took place, and the fact that his men were received 'de bonne grace' does not suggest hostile intent on the part of the Dutch.

He quotes correspondence with three Dutch officers present in the fleet during or soon after the surrender as evidence that no hostilities were needed or took place.

Placed on the Napoleon Series: June 2000