A Waterloo Hero: the Reminiscences of Friedrich Lindau

The Napoleon Series > Reviews > Memoirs > A Waterloo Hero: the Reminiscences of Friedrich Lindau 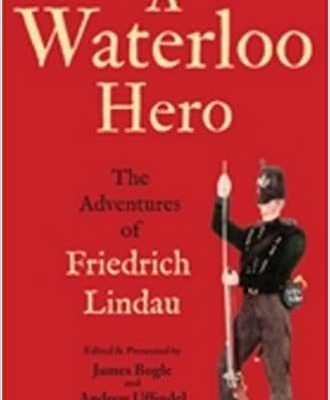 Occasionally a set of memoirs come out that are both filled with information and are fun to read.  A Waterloo Hero is definitely one of them.  Friedrich Lindau was illiterate and dictated these memoirs to his pastor.  Because his recollections were recorded thirty years after the events, they have the feel of an old soldier sitting in a tavern spinning a yarn over a beer.  But according to the editor’s introduction, Lindau’s memory was quite good.  His account is quite often supported by Beamish’s History of the King’s German Legion.

The title of the book is a bit misleading.  When I first bought, I thought it was another Waterloo memoir.  Instead it covers 1809 – 1815.  Friedrich Lindau was a common soldier, who escaped from Germany in 1809 and enlisted in the 2nd Light Battalion of the King’s German Legion (KGL).  He was sent to England where he spent the next 18 months in garrison.  Against his wishes, he was made an officer’s servant, and despite his efforts at being the worse servant ever, he was not relieved of those duties until the battalion went on active service in early 1811.

While in the Peninsula, Lindau would be in the thick of the action.  He was a light infantryman and reveled at skirmishing.  He was at Albuera, the expedition to Llerena, the siege of the forts at Salamanca, the battle of Salamanca, the siege of Burgos, Venta del Pozo, Vitoria, Tolosa, the storming of San Sebastian, the crossing of the Bidossa  River, the crossing of the Adour River, and in the next to last action of the Peninsular War – the sortie from Bayonne in April 1814.  Lindau was also at Waterloo, where he helped defend La Haye Sainte and was captured.

There memoirs ring with authenticity. Lindau does not write about strategy or tactics, but of things that concern the lowest ranks – staying alive and where his next meal would come from.  He was a master forager and he could find something to eat in the midst of a starving army.  Much of his story is about how evaded and out-witted various patrols, sergeants, officers, and local farmers in his quest to find something to eat.  He was quite unapologetic about his activities and took pride in his looting farmers and cheating inn-keepers.  A theme that runs through the book is that his sergeants and officers knew what he was doing and that as long as he shared his stash with his fellow soldiers and them, they turned a blind eye to his activities.

Despite being a rogue, Lindau was quite the combat soldier.  His stories are so engrossing they put the reader along side of him in the midst of the action. Typical of them was his description of Venta del Pozo, an action that occurred on 23 October 1812, during the British retreat back to the Portuguese border.

“It was early in the morning when we again came back to our battalion, which was halted near the highway in open ground.  Here meat was issued and we brought it to a fire very quickly but at the same moment there came the order to strike camp; we turned our kettles upside down, fastened them to our packs and put our meat into our knapsacks.  The 2nd Battalion marched back against the enemy and settled close to the highway in a deep dyke near a bridge over which the enemy had to approach. Scarcely were we ready to fire than we heard some way away a cavalry engagement, with loud calls and cries.  Immediately some English cavalry came in a distressed procession, springing over the bridge, the people full of blood, some riderless horses, others with wounds and their bowels hanging out, and in an instant they were away, with French cavalry close behind them. But when the French were over the bridge we gave them so fearsome a fire with our rifles that they very rapidly turned back, all those who were spared our bullets. We immediately formed a square and dragged along our artillery while the French followed cautiously.”

“A second regiment threw itself at our square and was bloodily repulsed.  A third regiment was set loose on the 1st Battalion but suffered a similar fate.  Again a fourth regiment wanted to get rid of us but could not properly come at us because of the numerous horses and riders that lay heaped up in front of us.  They swung round again after they got a hearty a greeting from us and many people lost their lives. Now there was suddenly a French officer’s horse, shot through the nose, in the middle of our square, trembling in all its limbs; no one had seen how it got there—in its death agony it must have leapt over us.  Sergeant Mener had appropriated it since he was the first to grab the reins and took as booty twenty gold Napoleon coins from its kitbag. The horse was shot since its wounds were considerable.  Meanwhile the French riders had retreated to a nearby hill and stationed themselves there.  With a triple salvo we forced them to move on again, and as evening drew on we withdrew peaceably with fife and drum.”

Lindau volunteered for the storming of San Sebastian in 1813 and earned his nickname for his refusal to leave his post, despite being seriously wounded in the head during the defense of la Haye Sainte at Waterloo.  For his actions, he was awarded the Guelphic Medal.

A Waterloo Hero is one of my favorite memoirs and I can not recommend it enough.  This edition is the first time Lindau’s memoirs have been translated into English and James Bogle should be commended for doing so.

Placed on the Napoleon Series: February 2010