The Bombardier and Pocket Gunner, 1813

The Napoleon Series > Reviews > Memoirs > The Bombardier and Pocket Gunner, 1813 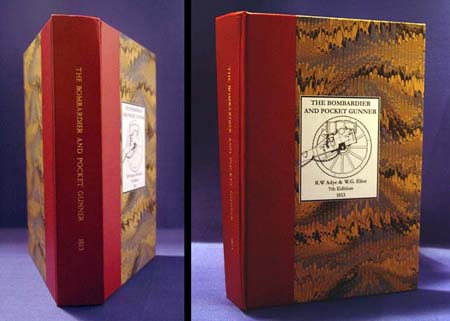 In Britain, from the mid-18th century until well into the 19th, there were no established official artillery manuals or texts that provided a basic text of the knowledge a Royal Artillery (RA) officer would need to carry out his professional duties. Instead the cadets who attended the Royal Military Academy at Woolwich — the training institution for artillery and engineer officers — were required to compile his own reference text based on notes from his lectures. It would appear that the theory was that, once he had been commissioned, the new gunner would make his own amendments and additions based on actual experience. This was hopeful but many of these “Cadet Notebooks” have survived and, of the half dozen or so this reviewer has examined, it is clear that many junior officers did not do much scribbling after graduating from the RMA and being commissioned. The need for a compact printed summary of practical information that an artillery officer might require was filled by little aide-memoires which would probably have been in the luggage of most competent RA officers during the Great War with France, 1793-1815.

The best known of these primers appeared in 1801 when Captain Ralph Willett Adye, brought out the Little Bombardier and Pocket Gunner. Adye had originally compiled this reference work for his own purposes but it “occurred to him, that many of his military friends stood in equal need of such an aid, and would willingly give a few shillings, for what they would not be at the trouble of collecting,” (almost certainly the exact truth), so he published his little handbook. The Pocket Gunner went through seven editions (including an American pirated version) between 1801 and 1815 and the most important of these was the 1813 edition, edited by Captain William Granville Eliot, which contained much new material. Despite the fact that the various editions of the Pocket Gunner must have enjoyed very large print runs, seemingly very few copies of the various editions have survived and the rarest of all is the 7th or 1813 edition, edited by Eliot. I was fortunate many years ago to acquire a photocopy of this very rare book and I regard it as the most useful volume in my library of military technical literature of the musket period. For this reason, it is a matter of much celebration to see The Bombardier and Pocket Gunner of 1813 brought back to life from the tombs of rare book collections in a splendid reprint edited by Stephen Summerfield and published by Ken Trotman.

This new edition of the 1813 Pocket Gunner contains every word of the original book — more than 400 pages jammed with concise information and tables arranged alphabetically — complete with the original pagination and index, which makes it very easy to find a subject within the book. As an example, the term “Exercise of artillery,” contains 39 1/2 pages of tightly-reasoned information that provide most of the basic drills for all types of British ordnance and the manoeuvre of field artillery with limbers, supplemented by numerous tables. Both Adye and Eliot preferred to present as much information as possible in tabular form to save space and the Pocket Gunner is packed with tables. Under the subject of “Artillery: Positions and Manoeuvre of Brigades of Artillery,” there are six pages of how to best deploy artillery in the field, which conclude with an injunction to “Never abandon your guns till the last extremity” as the “last discharges are the most destructive; they may perhaps be your salvation, and crown you with glory.” There are listings for almost every conceivable subject that a Royal Artillery officer should have at his finger tips, and some for a Royal Marine Artillery officer, such as the management of a bomb ketch in action. There is information on field engineering subjects, foreign armies and their artillery and equipment, the manufacture of artillery and small arm ammunition, the laying out of camps, and on, and on — the variety of information is nearly endless but the utility of the Pocket Gunner for the historian, researcher, re-enactor or wargamer is, quite simply, boundless. Better still, since the original Pocket Gunners were intended to actually fit in the pockets of a gunner officer’s coat, their pages were small (about 3 x 5 inches), which sometimes made them difficult to read (particularly for historians with fading eyesight). Happily, the 2010 edition has a larger format, approximately 135% greater than the original. Finally, it has been bound (and bound well) in a handsome leather and marble trim.

The value of this important period source has been enhanced by Stephen Summerfield’s editorial work. Summerfield sets the book and its compilers in the correct historical context. He provides accurate information on the various editions of the Pocket Gunner, — including commentary on their contents and sources — which appeared from 1801 to 1827 (and its competitors). He also provides a useful examination of the training of RA officers at Woolwich and the training syllabus; biographies of the Adye and Eliot families; a glossary of the abbreviations that appear in the Pocket Gunner and, finally, a descriptive list of the sources used by Eliot to compile the 1813 edition and some description of those sources. Summerfield’s efforts permit the reader to fully comprehend the extent of professional knowledge in the British artillery during the late 18th and 19th centuries; and it makes this book one of the most valuable English-language sources on Napoleonic artillery to appear in the last two decades.

I highly recommend this new edition of the 1813 Bombardier and Pocket Gunner to all serious students of Napoleonic warfare.